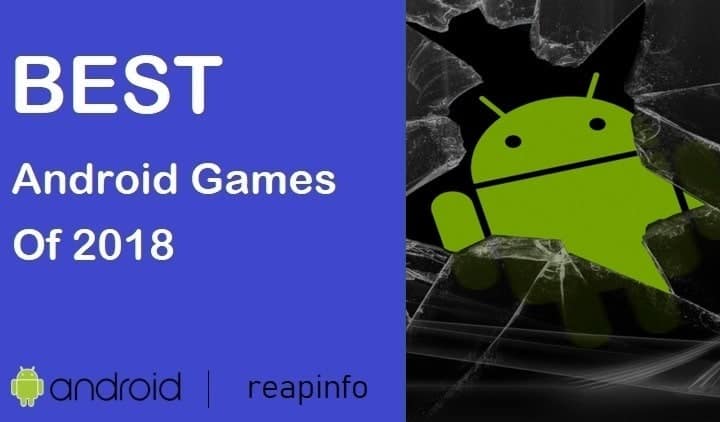 If you are looking for the best games on Android, then PUBG (Player Unknown’s Battlegrounds) is something to look for. It’s a multiplayer game with a crazy battlefield experience on mobile and topped our list. We compiled the list of top 10 android games which you can play this year.

This is a game where you are the mercenary. You are just dropping to the islands with the help of the parachute with 99 other players. What you have to do is find as much armor as you can. Weapons including machine guns, pistols, and other weapons that can be used to kill others. In the match, you have a team and the last man standing in the match wins. The game features a long map, and that is what makes it one of the Best Android Games. However, there is an electric storm that keeps on reducing your playing area so that you cannot go beyond than that.

The game concept is simple and provides you with much room to play. You have to land on an island, pick a gun, stay in the electronic circle and kill other players. This simple concept with a blend of the high graphics and amazing features makes it one of the top android games.

This one is for the people who love snowboarding. Alto’s adventure is also there in the featured list of the play store as the relaxing game takes on your heart and mind.

There are very simple relaxing controls that can help you to calm down your mind. The stress releasing game includes guiding the character Altos through the mountains. The game includes great backflips and stunts that not only adds up to your adventure but also relaxes you.

The game is one of the best games for android due to another reason that it has some soothing graphics including the sound that you can’t get out of your head. The small development team of the game has hit it great with the first version of the game.

The free game has more fun due to its simple handling. This is the great pick for you if you want to play your battles royally. The game starts with choosing a location to drop you on a map, and your character swings down with the help of the parachute. After that, he can pick up the weapons to shoot the enemies. The weapons can be changed to pick more advanced weapons to kill more aggressively. The game ends in 10 minutes so that you cannot complain about the boredom and pain fingers.

You can hide in the bushes and save yourself from the upcoming enemies. This game is one of the best games on Android for your heart craving for adventure.

Want to get a console as gameplay feels? Then Shadowrun is the right choice for you. The game features the base camps, black market to buy the weapons and much more. You would be led through many missions that would unlock the puzzles and create your showdown to the new enemies. Through this, you can achieve the greater fame that can be used to unlock new levels.

Get your new weapons and add up more spice to your fun drove soul through one of the Best Android games. So get into the deep dark secrets of the game and slip yourself from the different levels to get yourself into the deep depths.

If you’re looking for the best games on Android then you can’t miss playing Monument Valley.This game is beautiful, relaxing and kind of a puzzle. Your mission is to guide a princess Ida through an adventure through the monument valley. As you pass through the levels, your environment changes accordingly giving you deep gaming experience. The levels include the shifting and sliding as you proceed further.

Moreover, the game has kept great care to make it an awesome experience. From the art of designing the game to the music, everything is so spectacular that you would get cravings to play this game. It guides you through different structures and geometry all the way along.

Knights of Pen and Paper

This game is one of the top Android games. Well, this one is not from that list of the games with those brilliant graphics, but you would be playing a pen and paper game through the graphics that are completely retro based.

With 17 characters and 12 classes full of adventures, you would get a rabbit hole of great gaming experience. The game proves that gaming could be great fun without the graphics and you need to be active while playing the game. So drop yourself deep down in the game and pick your battles.

So come alive your fantasies with the two campaigns while the other is set for the later release.

If you are more into the prison break stuff, then the game is truly made for you. In the game, you are stuck in prison and find different ways to escape while going through your routine.

The game is getting into the new sensations of the play store even with the old school graphics. The game is complex, strategic and would power up your jammed brains. Steal the utensils from the kitchen and find out different ways to escape the prison. You have to pay the prisoners to tell you different ways of getting tools and earn to get money to do this all. So, it’s for the people who wish to scroll through the Best Android Games..

This game is the real test for the performance of your mobile. The game has some of the most amazing graphics that you can ever find out in the android games. You would have a Jetski, and all you need to do is race down all your competitors.

However, wait! Do you think the story ends here? You can do some amazing stunts and snatch your fame by defeating the game’s bosses. The only thing is that the game’s graphics are so intense that lower configuration cellphones would not be able to run it smoothly.

So get ready to go out there in the amazing world by playing this awesome out of the world game. Get yourself in the outer space adventures traveling yourself beyond the stars. What you need to do is make a strategy to balance and manage your resources to travel in sheer isolation.

The game has the story about an astronaut who is no longer in the solar system. All he can do is to believe the alien technology ship he has to guide himself to home. So play carefully and save the astronaut from getting dead.

If you like the puzzles, then this game can be a treat for your mind. The game is entirely about puzzles which you have to solve to get you to the next stage. No! It’s not easy than that. The game features some of the most aggressive puzzles that any platform has ever come across.

The game is beautifully crafted with the soundtrack and graphics to give you a deep down experience of the game. All you need is a dark room, concentration, and earphones.

These were the best android games for 2018 which we picked on the basis of user reviews and interactions, if you have any other best games which should be in the list just comment below and we will analyze them and try to add them as well.