6 Best Shows And Tv Series On Netflix To Watch 2018

You probably are reading this because the question ‘what should I watch on Netflix?’ has been bugging you lately.  It might also be the case of your friends and family asking you all the time, about what to watch on Netflix for your opinion on the best shows on Netflix available right now. We sympathize with you because we have been in the same situation as you. It is difficult to keep up with all the releases on Netflix as there seem to be so many new tv shows, which pop out now and then and the more that gets released, the more difficult it becomes to keep track of specific tv shows as they get lost in the ocean of tv content. 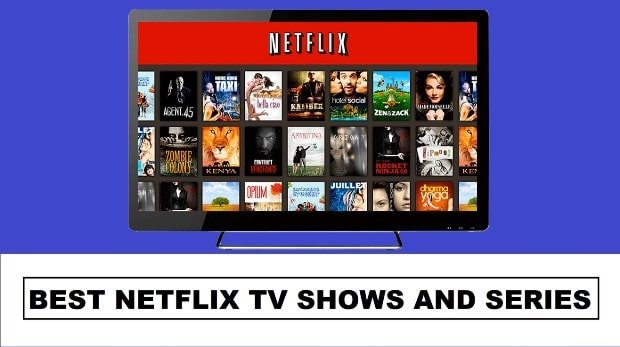 Don’t be frustrated because we have for you, the solution to your Netflix woes. We have taken the time to meticulously sort out the best shows on Netflix or the tv shows which we think would be appreciated by every viewer. Netflix has a plethora of tv shows to offer, and we have carefully sorted out and put together a healthy list of tv shows ranging from various genres such as crime, comedy, drama, superhero, animation, etc. After you are through with the shows we recommend, we are confident that next time someone asks you about ‘what’s good on Netflix?’, you will give him the best piece of advice. Continue watching for some serious binge-watching material!! 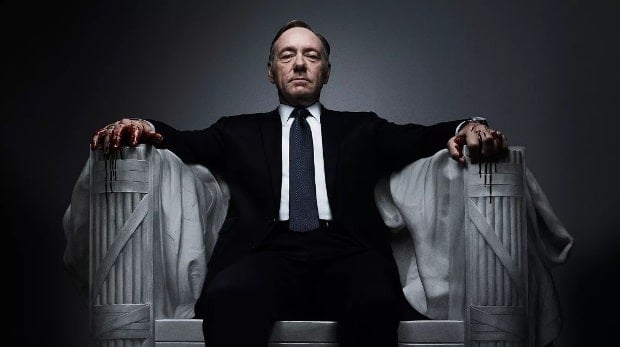 Starring Kevin Spacey as the lead character, this is the US television adaptation of the 1990 UK tv series of the same name. It follows the story of Frank Underwood (Kevin Spacey), a congressman in Washington DC, who having not been appointed as Secretary of State, starts on his path of seeking revenge through any means possible, against those who betrayed him or stood in his way.

This show serves as an eye-opener to what the lust of having and being in power does to us. It takes a very interesting approach to the American political scene as well with a dash of a romance between Frank and his wife and also keeps you amused with its dark comedy. Kevin Spacey keeps viewers coming back for more with his excellent performance as a power-hungry man among other power-hungry men and women, but who always comes out on top due to being the better manipulative predator who makes other dance to his tunes with his charms.

If you have watched The Usual Suspects, you know you should watch this at least, just for Kevin Spacey. 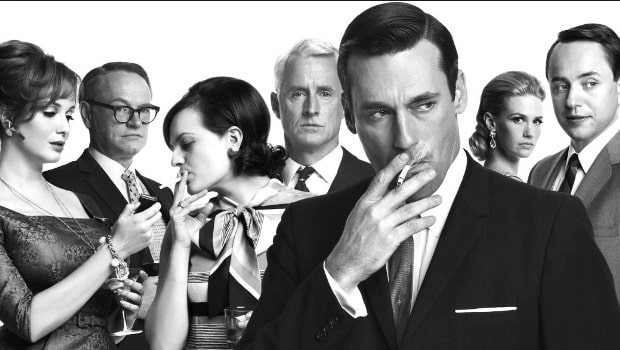 No television series list would be complete without Mad Men on the list. Arguably one of the most intelligent and well-written shows ever, it follows the personal and business side of the lives of a bunch of Americans in the advertising business through the 1960s.

Mad Men garnered rave reviews for its fantastic character development and the subtle but lasting impact it leaves about the changing tides of the surroundings of those characters in an America which was recovering post World War II. The visual style, the mannerisms of the characters on the late 1960s, the excellent cinematography and the historical authenticity of the show is what made the audiences and critics praise the show and keep coming back for more.

Mad Men won many awards and accolades during its seven-season run including the award of Primetime Emmy Award for Outstanding Drama Series for four seasons straight. Many people were expected it to have won more and rightfully so because this isn’t your average historical television drama.

It is a show written by some of the most intelligent and creative writers which makes the audience think about why they are watching the show in the first place. And let me tell you that anybody who watches the show watches episode after episode to figure out exactly why and are left mesmerized at the end. If we had to choose only one among the best Netflix series ever, Mad Men would be it. 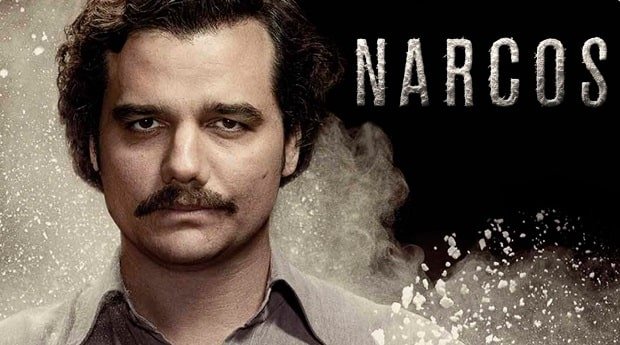 If you want a thriller which will keep you at the edge of your seats from the first episode to the last of every season, then this is the show for you. Narcosis a true story retelling of the lives of American DEA agents Steve Murphy and his partner Javier Pena who are in a constant cat and mouse chase with the drug lords of Colombia during the 1980s and 1990s. Their most noted nemesis is Pablo Escobar who was arguably the richest and most dangerous drug kingpin in history.

The show aptly captures not just the constant exchange of money, violence, and drugs between the drug cartels and the corrupt while law enforcement tries to take them down, but also the lives of the Colombian people, especially those of Medellin who had to live under the consequences of the rising instability in their country.

It does not glorify its villains or heroes and captures the personal lives of those on both sides of the law to show us that even Pablo Escobar or the members of the rival Calli Cartel dealt with their own personal demons and family issues making it a very grounded show which the audience appreciates.

Now granted some minor facts and events have been reconstructed to fit the smaller narrative and make it more fast paced.  But even then, it presents you with a generally true and whole idea about the rise and fall of drug cartels in a country reeling from corruption and violence and does not leave you in the dust of its purpose from the start till the end.

A fourth season is in the making, and we implore you to catch up before it releases. 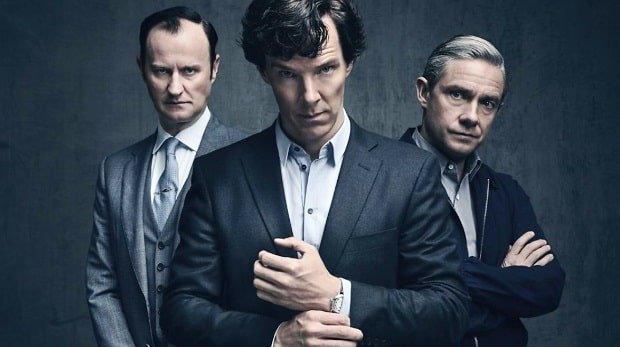 Take Sir Arthur Conan Doyle’s trusty detective of the olden times, bring him to the 21st century, turn him into a modern-day high functioning sociopath and you get Sherlock. We can sum it up in one word for you, BRILLIANT!! The show brilliantly captures the basic essence of the old Sherlock Holmes and puts a modern-day twist on the art of deduction.

The viewers are taken on a wonderful ride through the mind-boggling observations and conclusions. The titular character makes about learning the whereabouts of a victim from a simple wet coat and umbrella down to the guessing the next clue from the handwriting in a letter. The highly volatile, fast functioning character of Sherlock Holmes played by Benedict Cumberbatch is wonderfully balanced by the grounded, and calm demeanor of Dr. Watson played by Martin Freeman.

And we cannot praise Jim Moriarty played by Andrew Scott enough who takes a modern psychotic evil genius of the 21st century to a whole new level.

The latest season has not quite lived up to the expectations the audience were hoping for after the first three brilliant seasons, but we would recommend you to take the time to watch this funny and fast-paced retelling of a classic which will leave you with a content heart. Sir Arthur would have been so proud if he were alive today. 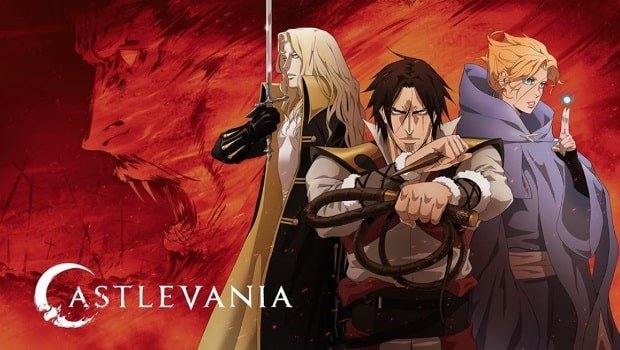 This show is an adult animated web series based on the video game Castlevania III: Dracula’s Curse, released by Konami in 1989. It follows the tale of Trevor Belmont who is a part of the once Belmont Family, famed for fighting against supernatural dangers to the world, in his fight against Dracula and his dark army to protect the god fearing people of Wallachia, after they burn Dracula’s wife alive on a stake claiming her to be a witch.

The animations are wonderful, and the music and art capture the gothic and dark theme of the video game, staying true to its roots. If you are into vampires and medieval fantasies, we definitely recommend Castlevania as it makes for a short weekend watch. 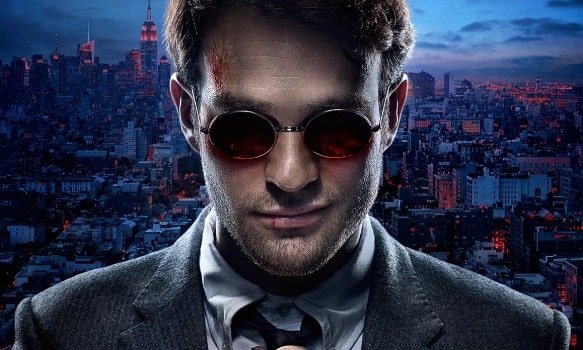 If you are a comic book fan and a fan of Marvel, then this web television series is what you need. This is more grounded and realistic retelling of Frank Miller’s Daredevil where a blind man with heightened sense goes against the crime which has spread across the city, especially against a much more powerful crime lord known as the Kingpin who does anything in his power to have it his way and make the titular character’s life miserable.

It portrays a strong sense of justice and the inner debate within the main character of whether to fight crime the right way through the law or to serve justice with his own hands, all the while keeping his relationship with his close friends and family from falling apart.

What’s more exciting is that it shares continuity with the main cinematic timeline of the Marvel universe in the big screen and you can expect some crossovers with other mainstream characters in the Marvel universe. We put this as one of the best series on Netflix and recommend you to watch it to satisfy your inner geek.