How to Fix Featured Images Appearing Twice in WordPress Posts

For regular WordPress users, creating a post in WordPress is a fairly easy process. However for those just starting out, there are still things that they might find confusing. While the featured images functionality is a total life saver, it requires some basic understanding of WordPress to properly use it. Recently one of our readers reached out to us with a problem that their featured image was displaying twice. It is a fairly common image problem that can easily be solved. In this article, we will show you how to fix featured images appearing twice in WordPress posts.

Why Featured Image is appearing Twice in my WordPress Posts?

If you don’t like the video or need more instructions, then continue reading.

How to Fix this? 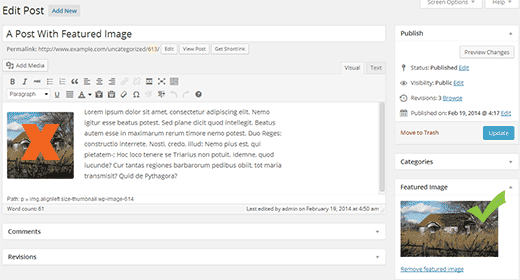 Featured images or post thumbnails are a WordPress theme feature. This means that the support for this feature is handled by your WordPress theme which is why you don’t see how it looks in your post editor.

When you set a featured image for a post, the database communicates with your theme that there is a featured image that can be displayed automatically. This allows theme developers to use consistent styles for post thumbnails and featured images through out your website.

While this may fix the duplicate featured image issue for most users, you may also come across some other surprising issues. For example if you change the theme, then your featured images may look stretched, skewed, and disproportionate. To fix this you will need to regenerate image sizes in WordPress.

If the above solution does not help fix the problem of featured images appearing twice, then there is an issue with the underlying code of your theme. In this case, the best solution is to contact your theme developer for help.

Check out the solution for other common image issues in WordPress.

We hope this article helped you fix featured images appearing twice in your WordPress posts. For questions and feedback, feel free to leave us a comment below. You can also reach out to us on Twitter and Google+.

How to Properly Change, Move and Delete WordPress Categories

Is It Safe to Use Outdated WordPress Plugins? (Explained)