Warframe Trading : How To Trade With Other Players? 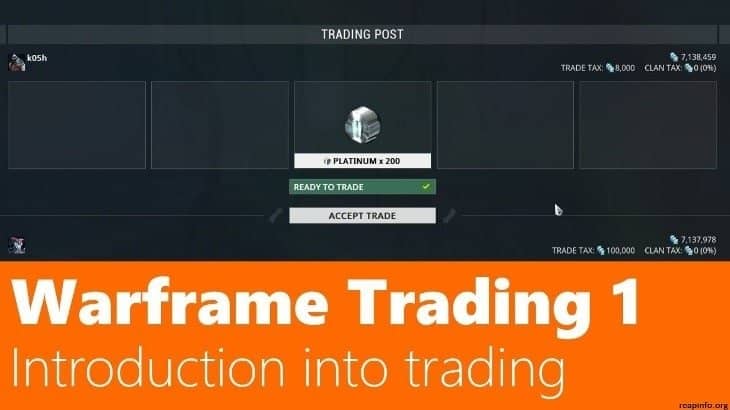 As we know Warframe is a free to play third person online game which revolves around the word of science fiction. The gamers who are enthusiastic about such games know the difficulties involved in crossing the obstacles and other qualities of the game. This game too, is not so easy. Players often face problems in trading with other players when we talk about warframe. Trading is a complicated process, just like everything in digital extremes free – to -play shooter. But the rewards are worth the struggle required in trading.

Trading helps you to add new weapons, rare blueprints, currency and platinum to your warframe and equip it with the mods as well. Learning how to trade in a warframe adds up numerous options for the new gamers as well. On the contrary, warframe does not provide any clear auction house for such a trade between players, but no worry, here is a complete guide on how to take enough benefits out of trading in warframe. Let us learn in warframe how to trade.

How To Unlock Trading In Warframe?

If you are looking forward to unlocking the feature to trade with other player, the primary requirement would be to make it up to Mastery Rank 2. Well, even if you are a new player, it would not take much time to reach this level.

This level, particularly defines your progress in the game and also is an indication about the number of trades, you averagely complete in a day. When it comes to offer trade, each player can trade up to 5 items to trade.

Process Of Trading In Warframe:

Now, you would think about how to trade in warframe? Well, the process to trade in a warframe game is facile. You need to remember that trading is only possible at these two particular locations: Clan Dojo or Maroo’s Bazaar.

The basic steps would be:

Now, there might be a slight problem before you start this trading process. You need to find player to trade with and keep up your excitement level. Don’t worry that’s a simple process too.

How To Find Players To Trade Easily?

Trading with players is considered to be one of the pretty difficult processes in warframe. Though there could be numerous ways to invite or find players to trade with them, but the basic approaches would be:

Finding trades in the TRADE CHART:

Trade chart is a channel in the game where players are looking for buying or selling items with each other. To open the trade chat, you will go to the chat window and click on the button (which certainly looks like two arrows in a circle), and then the window will come up numerous players advertising and offering their items. Now you can look for some basic key words which will show you the same buyers or items you are looking for with an interesting twist in it.

There will be terms like WTB (want to buy), WTS (want to sell), WTT (want to trade), and PC (price check). This way it becomes easy to sort and see what players are trying to sell and buy.

Once, you find the player to trade with, you can trade or haggle over the price they are offering it at.

Finding trades in the WARFRAME MARKET:

In this auction house, you can search for the item you wish to buy and you’ll see a list of sellers for that particular item. From that platform, you could message them through the chat window and ask for trading or offer them a trade. Here, you can create your listings of items, to sell stuff to other players.

This is a very convenient way to trade with other players in warframe. The only limitation of this platform is that you are not able to see if the other player is online or not and so, you cannot be certain about the trade.

Here players make advertisements for selling their items or offers to buy items from other players as well. If you want to trade, you can give them offer and later decide to meet in the game to complete the transaction.

Items Which You Could Trade:

Now there are only some particular items you could use in warframe trading using the above given methods, so let us see which items do not come under the trading list:

Now, apart from these basic informative items, you need to make sure that you get the best deal when you are trading items with players. To make sure, you need to double check the prices on warframe.market or you could use another tool could be the nexus.stats. All you need is a fair deal and then you can carry on with your trading process for unlocking some achievements in the game.

Warframe trading could be a simple process and will provide you some amazing benefits which would totally be worthy or your time investment. You could be the next best warframe trader.