The android phones come with the default keyboard. For most of the android users, the default keyboard is fine, but for most, they want something else, different than rest. They need not be installed as they’re the default ones. However, it’s not ones only option. There are many third party applications offering the best Android keyboards. All you’ll need to do is to install them and bring it to use. 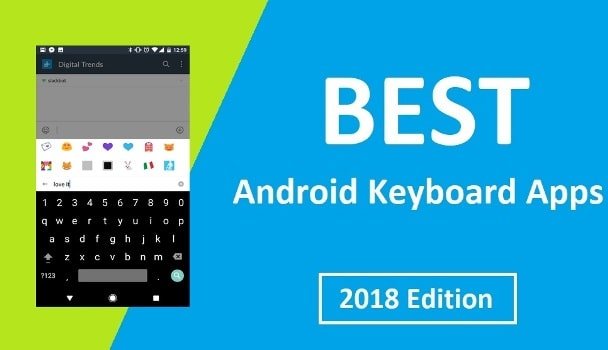 Here in this article, we have gathered the ten best keyboard app for Android that you can use in your android mobile phones and change the whole look. If you’re tired of the default keyboard that your phones offer and thrive for more features so that it’s easy to use, this is your go-to list. The keyboard apps that provide more than the defaulted keyboards read ahead to find out more about our top picks in case of best android keyboards.

Most of the Android users are aware of this android keyboard. One of the beautiful keyboard apps that keeps getting better with time. The more you use it, the much better it gets. The swipe keyboard was built in 2002, and after being taken over in 2011, there were changes made in this best android keyboard.

It has an error-correction type of algorithm with a language model that absorbs your vocabulary. There are different themes and emojis in this android keyboard, and it is effortless to use as it is customizable. Its speech recognition software is best as it provides accurate speech to text capabilities.

As the name suggests it is the Google-powered Android keyboard which is used by many Android users. This keyboard has gesture typing, reliability, speed, voice typing and what not. Also, it is a Google keyboard; you can search for any word you type on Google without opening the chrome.

The manual also keeps suggesting bitmojis and emojis along with the word you type. After using this best keyboard for Android, you might not look for another one as it almost offers everything one requires while being right in a matter of looks.

Another best choice for android keyboard, it can easily replace the Android and iOS keyboards without any hesitation. Acquired by Microsoft, this keyboard application has millions of users from all around the world.

This one automatically predicts the next word while you type as it uses artificial intelligence which is quite impressive. There is an inbuilt GIF search, different themes, divided numbers rows, etc.

This one is new for Android users as Grammarly has recently launched its news application that too for mobile phones. Grammarly began as a chrome extension and now presented before us in keyboard form. This app checks as suggests the correct punctuation, grammar, spelling and right sentence fragmentation.

Also, there is no gesture swiping in this android keyboard app as it’s still new in the game. However, for people who use Grammarly extension on their PC, this may turn out as the best option.

This best android keyboard app is undoubtedly the fastest working keyboard on this list. The Fleksy also has the world record for its fastest typing speed and that too twice.

It has the latest auto correct along with gesture typing that helps to take less time while typing. There is also a swiping gesture that controls space, delete and word corrections.

Almost similar to the Google Keyboard, this one has many features. It lets you customise it according to your needs. There is gesture typing, swiping, resizing the keyboard, autocorrect, one hand typing mode, GIF search, predictive typing etc.

There is also night feature and day feature along with the timer available in the keyboard.

This one application has been around the corner for a long time. It is considered as best keyboard app for Android and this one offers a lot of standard features to the users. There is a prediction, auto correction, emoji suggestion and customisation of the keyboard, with more than thousands of themes to select.

However, there is one catch. The best Android keyboard app comes with 18 days trial, and then you’ll have to fish your pocket to keep using this keyboard.

With more than million users worldwide, Touchpal can easily be labelled as the best android keypad 2018 without a single doubt. Compatible with almost every android phone, this one is free for android users.

There are lots of feature such as GIF keyboard, glide typing, gesture, swiping and what not. Install and use it right away.

If you want to replace that default keyboard of yours and want to have something is simple and easy to look at, Go Keyboard is undoubtedly the best Android keyboard application.

This keyboard can work with many different languages and with the help of the integrated dictionary you can learn the meaning of any word instantly. It also has some in-app purchases and a few ads to work with.

This one is different from all the other best Android keyboards on this list. With the unique feature, this one is a standard looking application which thinks outside the box. This one already knows what you are going to type so you can type on it sloppily without worrying about the mistakes.

This Android keyboard application offers a free trial for a month, and then you need to spend some penny to use it.

So these were our picks for top 10 best keyboard app for Android which you can use other than the default ones. These are easy to use and light in configuration. Many other keyboards bring malware and other viruses that can harm the data on our phone. However, these are the best Android keyboards, used by millions of users around the world. Most of them are free and offers the best features that your default android keyboards can’t. This was our list of best keyboard app for Android, and you can use them without worrying.

Why Do You Need A VPN On Android?