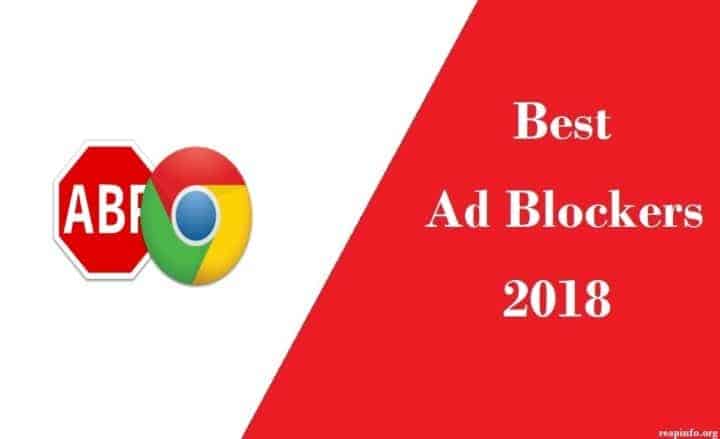 Has it ever happen to you that an unwanted ad started on your screen leaving you embarrassed for the whole day? To me, yes it has happened a lot. It’s quite irritating to keep closing the unwanted ads off the screen and stop it from interrupting again and again.

But, what help a lot are ad blockers that help you to put all these unwanted online advertisements at bay and surf the net without worrying about your privacy intrusion.

This one is the best ad blocker for Chrome, Safari and Opera. This ad blocker uses a series of different filters to involuntarily block all of the data carrying advertisements that are coming from all the known advertisement providers as well as servers. After filtering content, this ad blocker only displays the default block to the users.

This AdBlock is trusted by millions of users from all around the world and lets you browse through the protected and safe content.

Used only for androids, AdAway falls directly under the category of the best android ad blocker. With a device that is rooted, users can check out AdAway, free application and of open source working on the host file level. It makes any web page or app making request diverted towards a blank IP address.

There are two benefits- it saves you bandwidth easily and also saves you from getting spammed. It gives you the freedom to whitelist or blank list particular sites according to your need too. It lets you add your own redirects too.

But the only problem is that this AdAway app isn’t available on Google play store and you have to download it from any third party app.

This ad blocker works for three platforms- Android, desktop and iOS. This ad blocker builds blocking and the private system for desktop and mobile phones provides a total package to its user so that they don’t need to use extensions so to increase privacy or security. The option for selective blocking and white-listing is also available.

This one also has an option called “Brave Payments” which lets you do a micro-payment so that you surf the web freely without feeling guilty for depriving these online advertisers out of revenue. This one is one of the best ad blockers possibly.

This ad blocker extension provides for chrome, opera and Firefox. This ad blocker is created and produce as a product of collaboration between the Electronic Frontier Foundation and the Tor Project. This Ad blocker helps to encrypt all of your communications and online searching or say browsing by rewriting the HTTP link requests to HTTP simply.

Because of this encryption, it will lead you to the sites that are safe and are very well secured causing no further trouble. This one can easily be labelled as the best ad blocker for chrome.

The safest ad blocker for Firefox, safari, chrome and opera, this ad blocker is used widely to block ads that cover up the screen space a lot. This ad blocker logs or says disable the cookies that our main source of ad pop-ups. It also disables tracking pixels, and many different tools that are used to target our online habits and present advertisements accordingly.

It can block them in two ways- selectively or globally. The ad blocker also includes tracking visualization, blacklists as well as whitelist too. This best ad blocker sounds promising and worth a try as well.

Made specifically for desktop, this ad blocker helps to anonymize the activities performed on the internet by bouncing all the data one can send or receive via anonymous distributed router networks to foil one common surveillance technique that is called traffic analysis. It reveals the sites one visitor searches for or whomever you’re communicating with.

This ad blocker is all in one package that has everything that one needs to surf the net to easily install the package. It includes an advanced version of Firefox and privacy aids such as No Script and one automatic set up that easily connects to the latest circuits of Tor.

Users that want to have access to Tor anonymizing on their mobile devices have different of options to look at and decide. For the androids one, they have OrBot or OrFox which is a popular choice amongst users. Usually, OrBot works as a proxy connector application to Tor Network. Whereas, OrFox adds good quality of life features to the Or Web.

For the iOS users, there is Onion Browser to block all the unwanted advertisements. But browsing through Tor networks will definitely slow down some of your browsing speed. Also, keep a note that Onion Browser is not a free app for iOS users.

All of these ad blockers are used by millions of people all around the world and are based on their unbiased reviews. By adding these extensions or ad blockers, you’ll be saved from a lot of embarrassment by the ads that pop up on the screens at unwanted tomes and at unwanted places.

It may happen that some of these ad blockers are bit complex to set up but once done, they will save your lot many clicks. You can have pleasant digital surfing experience and can save your data from getting stored by these cookies and advertisements and being used later to dwell in your system by unwanted means.

Hackers also use these cookies to gather the data from the user and steal all the important files from your system. So, to create a safe and secure digital environment around you download and add these best ad blockers on your chrome, safari, android, iOS, opera and desktop and have the best net surfing experience.