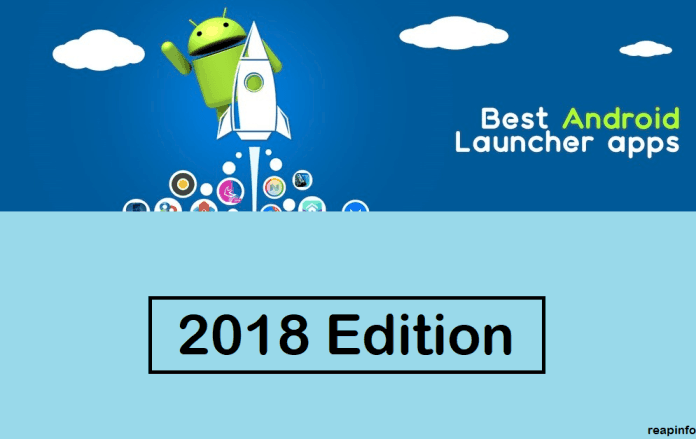 Android is currently dominating the Smartphone market and the main reason behind its success is the highly customizable platform that it provides to the user base. The android launchers are without any doubt the most customizable part of the Android. Without a launcher, any Android phone will not be able to function. The launcher comprises of the home screen and holds a catalog of the applications that you have on your device. This is the reason every Android-based device comes with a default launcher created and installed by the manufacturer.

Why should you check the third-party launchers?

In the past few years, the android launchers have become full of features. As there are hundreds of launchers available on the play store, it can get overwhelming for the users to choose the best one. In this article, we have compiled a list of top 10 android launchers for 2018 which you can choose from.

It is one of the Best android launchers available on Play Story. It is fast, lightweight and very efficient for all users. There is a number of icon packs available on the play store which work perfectly with this launcher. It supports notification badges, dock customization, folder and icon customizations, gesture customization and many other options which will increase the functionality of your phone.

It also has an option that shows frequently sued apps on the top row in the app drawer. This launcher supports the app shortcuts that you can find in Android Nougat. The premium version of this launcher has more options which to enhance your Android experience.

Designed for the performance, it is one of the fastest android launchers available on the Play store. There are a lot of users who have praised its smoothness. It has a Universal Search feature which helps you in searching for your apps from one place. There are a lot of home screen shortcuts and customizations available which you can use.

You can also customize your folder grid and app drawer as well. The only downside of this launcher is that you won’t find a lot of gestures in it. Otherwise, it is one of the top choices that offer simplicity and fast response.

If you are looking for a launcher that has tons of customizations options, Buzz Launcher will be the best launcher for android for you. There is an amazing feature called Home pack Buzz that allows home screen customization service which has more than 700,000 home screens uploads and shared by a lot of users. The app comes with RAM cleaner and app-locker as well.

Another interesting feature is Screen Effects which is similar to live wallpaper but it does not replace your wallpaper. It adds animation effects like autumn leaves and snowfall on the existing wallpaper.

Visually a very mesmerizing launcher, it comes with many best android themes and icon packs that you can download from the play store. It is lightweight and thus very efficient and works on both Smartphone’s and tablets. You will have an option to add up to 9 customizable home screens and also hide apps from the app drawer which you are not using regularly.

You can sort the apps according to the name, date of installation and the frequency of usage. There is a pro version of the app available which unlocks even more customizations options, features, and gestures.

If you are looking for a launcher that can neatly organize your phone then this is the best option for you. It has a home-screen folder where you can create categories during the initial setup. It also provides customization gestures and a prediction bar which helps in searching apps quickly. The launcher comes with a swipe on the home screen that will take you to a feature called quick contacts where all the frequently used contacts can be found.

It also has a feature names We Watch that add another screen where you can easily scroll through news feeds, The launcher remembers your preferences and learns with time to make your life easier. Everything Me Deserves to be in the list of top android launchers.

It is yet another lightweight launcher which is efficient and fast. It claims to use Artificial Intelligence to search for apps, contacts, and content over the internet. The app drawer in this launcher has a sidebar that can divide the apps as per the categories. It comes with a feature called smart turn off that automatically turns off the screen when you lay down the phone.

Previously known as the Arrow Launcher, Microsoft launcher is one of the most elegant and fast android launchers available on the Play Store. Developed by Microsoft, it comes with an option to update wallpaper from Bing every day.

It has a panel that shows recently opened media and contacts. This has an option to merge duplicate contacts. It is available in all major languages.

It is one of the most stable, easy-to-use and fast Android launchers which provide hundreds of customization options. Its UI gives the impression of stock Android.

It has a feature that allows you to change the interface color according to the wallpaper you are using. This also deserves to be in the list of top amdroid launchers of 2018.

Action Launcher is one of the most famous launchers among the Android users. It comes with Android stock feel which is loved by many. There is an option by the name Quicktheme which allows you the customize the color of the UI according to the wallpaper.

The Shutter allows you to check an app’s widget without setting it on the home screen. It comes with icon pack support, gestures and app drawer configurations.

It comes with a standard home screen that allows information-packed lists of stuff. You can put the latest SMS, missed call, media player, system info, news, twitter feed and much more on the home screen.

The paid version also includes the integration of some apps like Telegram in the widgets.

Android provides a lot of customization options for the developers. These Best Android launchers help the users in customizing the smart device in a way that makes their lives much easier. If you are a student, business person or even a freelancer or an employee in any company, these launchers can help you in making your life much easier with the help of customizations according to your needs.