How to Feature/Bury Comments in WordPress with Featured Comments

Comments are great for increasing user engagement, but as your site grows in popularity long comment threads can become a mixed blessing. On one hand you love the community and the discussion, but on the other hand you’ll notice that some comments are great while others not so much. Recently one of our readers came to us with this problem in hopes of finding a solution. To improve the quality of discussion, you can encourage good comments by featuring them and discourage unhelpful comments by burying them. In this article, we will show you how to feature/bury comments in WordPress.

Fostering a large community can be a challenge. You want to make sure that you’re rewarding users who’re adding the most value to the discussion while at the same time politely discouraging other users for leaving unhelpful comments.

This is when Featured Comments come in handy. It allows the admins to highlight the best comments by featuring them.

This plugin adds the ability for admins to bury a specific comment which will minimize the comment rather than deleting it. In other words, the users leaving the comment won’t complain about censorship while other users can browse through the comments without the distraction.

One of our favorite sites, CSS Tricks by Chris Coyier uses this technique. 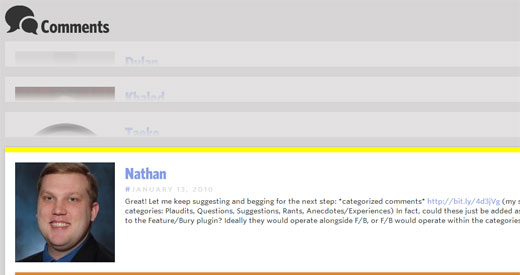 Notice how he’s burying the unhelpful comments while highlight the good ones.

How to Setup Featured Comments in WordPress

First thing you need to do is install and activate the Featured Comments plugin. After activating the plugin, you can go to the Comments screen in your admin area where you will notice Feature and Bury links below each comment. Once you feature a comment, it will turn green in the admin area where as buried comments will be dimmed, like this:

However, these changes are not reflected by default on the front-end of your site. The plugin simply adds a CSS class .featured or .buried to respective comments, and give you full freedom to control how you want it to look by modifying the CSS.

You can add CSS classes in your theme’s stylesheet to handle the display of featured and buried comments on the front end.

Below is an example CSS snippet that you can use. If you want to make it look like CSS-Tricks, then you will have to add some jQuery magic as well.

Feel free to modify the CSS to match your own color scheme. If you use the CSS above, then this is how featured and buried comments will appear on your site. 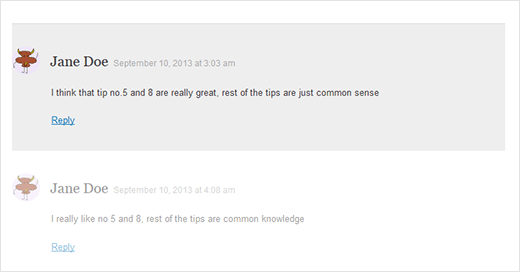 On top of having the admins or moderators making the executive decision about featured/bury comments, you can also let users report inappropriate comments. This will make your job a bit easier while at the same time make your community feel like they’re part of something bigger.

We hope this article helped you highlight good comments and discourage bad comments with Featured Comments. For feedback and questions, please leave us a comment below or join us on Twitter.

How to Create a Dropbox Upload Form in WordPress

How to Clean up Your WordPress Media Library (2 Easy Methods)

How to Track WordPress Category and Tag Analytics (Easy Way)

How to Create a Dropbox Upload Form in WordPress