Are you that comic book nerd who spends half of the day reading them and the other half imagining yourself in it? Do you read tons of comics and are now broken because of the money you have to spend on them? Well, we have got everything sorted for you. Listing the top websites and apps to read comics online for free! 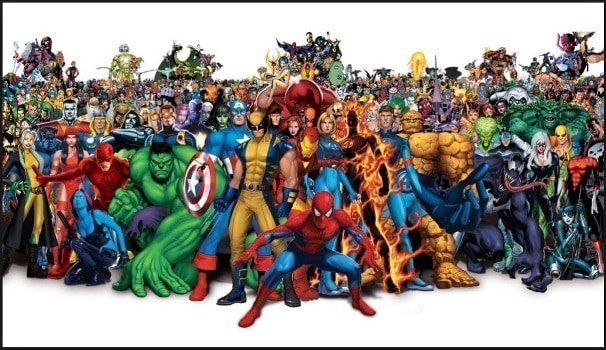 If you are just starting let us suggest what actually comics are and some big names in the comics world which can help you build interest in them instantly.

The comics are basically coloured or sometimes b/w graphic novels where usually the dialogues of the characters are inside speech balloons. The illustrations are also not very simple, rather they are made more unrealistic yet very glamorous to captivate the readers. Usually, the pages are very glossy, and the colour schemes are very rich and vivid.

It is believed that the Japanese were the first ones to start the tradition with their first mangas back in the early 19th century. The earliest to be recorded in the 19th century Britain is Punch which was popular due to its humorous caricatures.  The first American comics was The Yellow Kid- A 1890’s newspaper strip.

Here is the list of the websites that you can scroll to read comic books online.

It is one of the best and legal sites to read comics. This site has comics including those from the golden age. The content also includes comic strips and pulp fiction. The site also offers non-English content, thus probably making it the largest library. Go for it if you want to read comics of the golden era.

It is one of the oldest sites to provide comic content for free- since 2001. It also provides downloadable comic store on the web. They have a wide collection of indie as well as major publishers. The site has a catalogue showcasing hottest titles, newest titles, suggested for me, and browse by category. Opt this site to get your selection sorted.

The site is home to numerous publishers, mangas, graphic novels and major comics. Although the content is free to read yet, there is a paid subscription if you want that carte blanch experience to the unlimited library. The subscription is for $5.99/ month. Comic enthusiasts might find it nominal. The panel is sorted into new, sales, browse, and unlimited. The colour scheme of the site is basic and nest. You are most probable to find the comic of your choice.

This one is sorted for all Marvel fans out there. The site is an absolute solution to read marvel comics online. The site offers a wide catalogue for free. You might also find those old famous comic books of all time. The library is extensive, and you won’t have much trouble in getting the comics.

The site is not limited to just Tv shows and anime. The site has content for those who have an appetite for Japanese comics-“Mangas”. The site is compatible for Android and iOS both. Though this site is paid as $6.95/month but you will have a 15 day free trial prior to browse through the site. It has all the notable titles.

This site provides free manga legally and is compatible both on Android and iOS. The site basically has most of the notable titles. The site is easy to use and has a good UI.

Although this site has a paid subscription for $25.99/p.a. The bright side is that it has all of the major mangas which you can read online like Hunter x Hunter, One Piece and much more.

The site covers content ranging from large publishers like Marvel, DC to many other comics that too free of charge.

Its library has the collection of the latest version of comics as well as the comic books dating back to the beginning of its evolution. The site gives free access to all the comics. The site’s look itself is so professional and eye-pleasing, making readers want to explore it. Check this website if you want to read free comics online.

The site offers various less known comics to popular ones like Marvel and DC comics. The site is very simple and has a flash figurine on its logo giving a clear sign of the site’s motto. Though it has some ads in the site, but that won’t disturb your browsing. There is a new updates section on the site which you can always check for your favourite comics.

This one is a very great website to check for free comics, where you can download the comics for free. Navigating Marvel comics won’t be that easy though yet try, and you’ll get there. It has stored many back issues of Marvel and DC comics and all the other small publishers.

This one is the longest-running independent fantasy graphic novel series in the USA. This site provides high quality scans, and the comics are truly vivid, giving that exact feel of a paperback. The series is completely available on site absolutely free.

This site basically has all that latest news, theories, speculations, fanbase spinoffs about the comic characters, their shows, movies, books and games. all the sci-fi and comics enthusiasts can come over here to quench their thirst to discuss with a like-minded community. However, the add on is that the website has also a good library of full comics for free. So all those comic nerds go on the website to get those free comic books and the platform to have some great discussion.

This one has been recommended in the end because these sites give very less to offer for free. Nonetheless will give you the best and original content. Start with your free comics reading experience over here and download them on iPad, android, windows, kindle and browser. Later you can opt for their monthly or annual subscription.

The site doesn’t have any kind of explicit content and solely focuses on its younger audience. There is not much to offer yet the selective content is good enough.

Here is our recommendation of websites which you can opt to read online comics.

But if you have never read comics, you can get baffled as to where to start from. There are endless entertaining comics which you can start reading. Well, here we are giving you some suggestions, from where you can start, to get your interest in reading the comics.

The story is about a young and a simple girl living in New Jersey who is blessed with extraordinary powers.

The story is about a group of teens who suspect that their parents are supervillains, and are actually right. They discover their superpowers and get together to become heroes instead of following their parents’ footsteps. The comics of the series is a must read for teens.

This one is not of the usual superheroes instead, a compilation of stories about flight and flying experience from 21 different comic book authors. The visuals are eye appealing and the stories equally heart-warming.

This one is no comic but actually a Manga series. The story revolves around Lucy who wants to become a part of a guild called fairy tail, her encounter with NatsuDragneel and his friends who are already a part of the guild and the adventures that follows them. This one is light yet adventurous and interesting one to start with from mangas.

This one by Brenden Fletcher and Cameron Stewart is about a batgirl joining the classic superheroes and has been rewritten for the new generation. In this, the girl is a crime fighter and lives with a roommate in Burnside. Check this one out for some girl action. You go, girl!

The story revolves around lumberjane scouts, solving mysteries around Miss Quinzella Thiskwin’s camp. Read this one to get that famous five vibes only with added illustrations and amazing storyline.

These are some of our suggestion to invoke interest in the readers towards the comic books.