How To Use Xbox One Controller On PC Guide 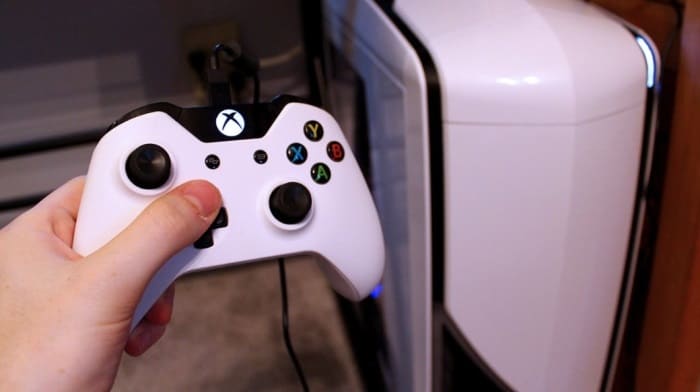 The D-pad was mostly frowned upon, and the absence of Bluetooth connectivity at the start led to even more frustrations. Thankfully, with the new Xbox One controller for PC, all the earlier flaws were rectified.

The Xbox One Controller

The Xbox One controller adopted has a minimal approach and is sleek as compared to its older sibling. Its frame is slimmer and it now no more has the cheap plastic exterior which made it feel less premium and more prone to dirt.

The colour and tone are much subtler as well. A stealthier approach has been taken on this one, with the gentler colour scheme and highlights. But what is great about it is that Microsoft will let you custom design your own controllers.

The playmate sticks and face buttons have not changed much in terms of looks but feel more responsive and lighter. The new D-pad was something a lot of users wanted to improvement in since the previous iteration. It is now too tactile and has a concave appearance with a loud touch for their liking. The buttons of the shoulders and the triggers feel quite good at their own place, but we’re pretty good, to begin with on the last model.

For power, the new Xbox One controller two different AA batteries which are estimated to last you around forty hours of gameplay in one cycle. Microsoft recommends you to use rechargeable batteries which is more economical in the long run.

Now that we have the looks, feels and specification out of the way let us tell you how to use Xbox one controller on pc for your gaming needs in case you feel like using the controller.

How to use Xbox one controller on pc via USB

Windows 10 operating system is ideal to use a controller, and you can have up to 8 controllers connected at once. This is reduced to 4 if you have Xbox chat connected or only two if you have a stereo headset connected.

Windows 7 and eight will allow you up to 4 controllers at a time. Please make note that audio throughput support is not available for Windows 8 and 7.

(warning – make sure the micro USB cable you use supports data passing and is of good quality. Otherwise, you may notice considerable input lag while playing games. Also, some micro USB cables only support charging of devices, so in case your controller isn’t working you should try other USB cables as well).

How to use Xbox one controller on pc via wireless adapter

This process is pretty simple as well, similar to the connection via a USB cable.

If you should face any issue, make sure to check all other USB ports or get a new Xbox Wireless Adapter.

How to use Xbox one controller on pc via Bluetooth

The best things in life are also the hardest ones to get. And in this case, connecting via Bluetooth is no easy task.

The first and foremost thing you have to take care of is that the model of the Xbox one controller you possess is Bluetooth compatible. Not all models have Bluetooth support.

You will also be able to tell if your controller has a 3.5 mm headphone jack at the lowdown of the control panel. That is an indication your controller supports Bluetooth.

The last thing would be to just check your package when you bought the controller. That should be easy enough!!

So, here is how you connect your Xbox One controller to your PC via Bluetooth.

(You should make a note that Bluetooth support for Xbox one controller is only allowed on Windows 10 PCs and not earlier operating systems).

Know how to configure and keep your controller updated

You can keep your Xbox one controller for PC updated via the Xbox Accessories app on the windows store. Keep in mind that this is only possible on a Windows 10 system.

Plug in your controller via USB cable to your PC. Download the Xbox Accessories app and open it. Once your controller has been detected, click on ‘More options’ to check whether there is a update for your firmware controller. If there is, download and let it update onto your controller.

Instead of seeking to configure your controller option on a game step, you should use the Accessories option to form a variation in button mapping, invert stick swapping and to trigger or to disable or enable the rumble. You can also Accessories app for configuring the sensitivity of analog stick and trigger option.