The combination of quick and charge move that your Pokemon uses in the Raid battles and Gym are known as Movesets.

If you are looking for pokemon go best movesets for Groudon, Kyogre, Tyranitar, Celebi, Slaking, Moltres, Mewtwo, Dragonite, Rayquaza and other Pokémon, then this is the right place for you. Just like CP and IV, movesets are also very important. 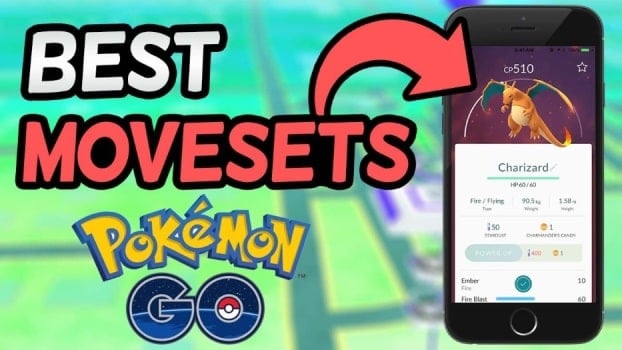 With pokemon go movesets you can do more damage in very less time. And, if you don’t have move sets, you can still do the damage but it would be slower and less.

Celebi has a lot of potentials but lacks the movesets. Dazzling Gleam, a fairy type move that outscores the Psychic and the Plodding cannon. It has nothing to offer as a Grass attacker. Best moveset for Celebi is – Confusion + Dazzling Gleam

This is the second of legendary Titans of Hoenn. Registeel is a Steel-type Pokemon. Because of its high defense stats, it is best in Raid battles. As legendary pokemon cannot be used in Gyms, so these are not much useful.

The best moveset for Registeel is – Metal Claw + Flash Cannon

Mew is able to learn Fast and Charge Moves of any type. Mew won’t be topping any defender or attacking chart, so you can use what works well against whatever you fight.

It is the first legendary titan to enter the Pokemon. Its strength is in its defense and despite that, it can be used in Gyms. Compared to the other Tier 5 Bosses, Regice is not as compelling as they are.

These are the other half of the Legendary Pokemon, Eon Duo, and Psychic types. Latias are as fins as Latios pokemon.

Kyogre can reach to highest CP in the Pokemon Go lineup – 4074. This is the most powerful water type in the Pokemon Go that replaces the Vaporeon and the Waterfall’s Gyarados. As a Charge Move, it can learn Blizzard, but don’t have a Quick Move to Match.

Rayquaza enters at the last in the arena of Pokemon Go. Compared to the Kyogre and Groudon, it cannot reach CP as high as they can. Despite that, it is one of the best Dragon-types as well as the best Flying-type.

It can be obtained from the Ex-Raids. While doing so, you can also get one of the best attackers in the Pokemon Go. Despite the fact that game has nerfed Legendary clone of Mew, but still, attacks and base stats of MewTwo are very extreme.

In the current lineup – 4074, Groudon can reach the highest CP. It is the most powerful in the ground-type in the Pokemon Go that replaces the Rhydon. Groudon is unable to learn any new Damaging Mud Slap but can get Mud Shot + Earthquake of which every Electric-type fears. It can also learn the Solar Beam and Dragon Tail. But do it only if you don’t have other options as there are more Pokemon who can do this.

It is a water-type specialist but still, it is not as good as Vaporeon and Gyarados. It cannot get a very high CP. It was possible sometimes before that it could get Hidden Power Water but with very difficulty

Best Movesets for Suicune – Hydro Pump with Anything

This is a Legendary fire beast that can also be considered as the firehouse. It is not as great as it can be. The reason is Moltres and Charizard are also able to learn the movesets of Entie. But still, for Fire-type Pokemon, it is still the best. Entie can reach the more CP than Moltres.

Among the all Legendary Pokemon in the Game, Lugia is the most powerful. It is a Psychic type and has Psychic movesets. These movesets can destroy Machamp like Fighting-types.

It has access only to the ice type movesets. It can reach the 3000 CP. It takes a very long time to deliver Charge Moves. So, Articuno’s only quick move is Frost Breath.

So these are the best Pokemon Go Movesets. Hope you like this pokemon go moveset guide.