Program has been in place since 2016 and involves direct, opt-in integration.

Google is integrating third-party reviews into the Knowledge Graph for hotels. It apparently has been happening since 2016 and is entirely opt-in for the provider.

Google works directly with the third-party review source (e.g., TripAdvisor) to integrate the content. In the example below, TripAdvisor reviews for Southern California hotel Terranea are available under the “view Google reviews” link in the Knowledge Panel. 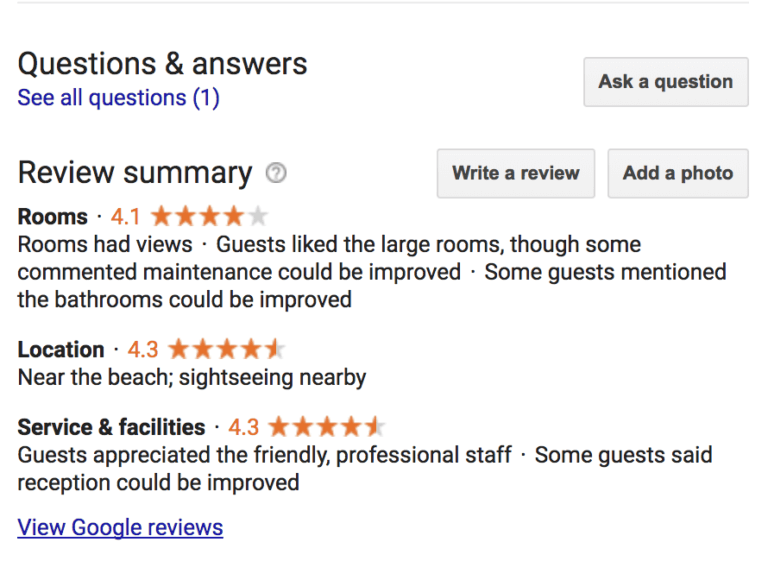 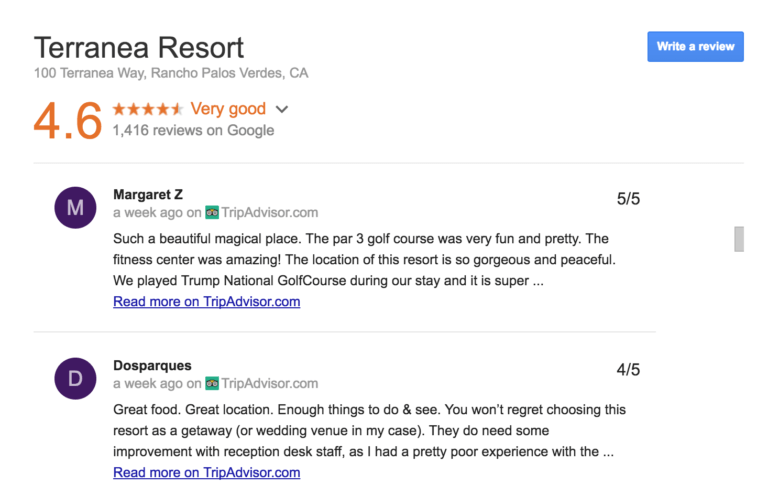 Google got into trouble roughly seven years ago for “scraping” and incorporating third-party review content from sites like TripAdvisor and Yelp into Google Places without permission. Yelp saw the move as a kind of antitrust “extortion” and mounted a vigorous campaign against it.

One of the provisions of Google’s 2012 antitrust settlement with the FTC was that the company would allow publishers to block Google from including third-party reviews in “vertical search offerings” without their being excluded from the general index. According to the FTC statement announcing the settlement:

Google also has promised to provide all websites the option to keep their content out of Google’s vertical search offerings, while still having them appear in Google’s general, or “organic,” web search results. The FTC investigated allegations that Google misappropriated content, such as user reviews and star ratings, from competing websites in order to improve its own vertical offerings, such as Google Local and Google Shopping.

The settlement expired on December 27. However, in a letter to the FTC, Google said it would continue to adhere to the main terms, including enabling publishers to opt out of having their content being displayed in Google’s vertical results:

The commitments cover two main areas. First, Google agreed to remove certain clauses from its AdWords API Terms and Conditions. Second, Google agreed to provide an opt-out mechanism for websites to opt out of the display of their crawled content on certain Google web pages linked to google.com in the United States on a domain-by-domain basis. We believe that these policies provide additional flexibility for developers and websites, and we will continue them as policies after the commitments expire

How to Use Intelligent Site Search to Increase Conversions

6 Reasons Why Your Computer Keeps Freezing